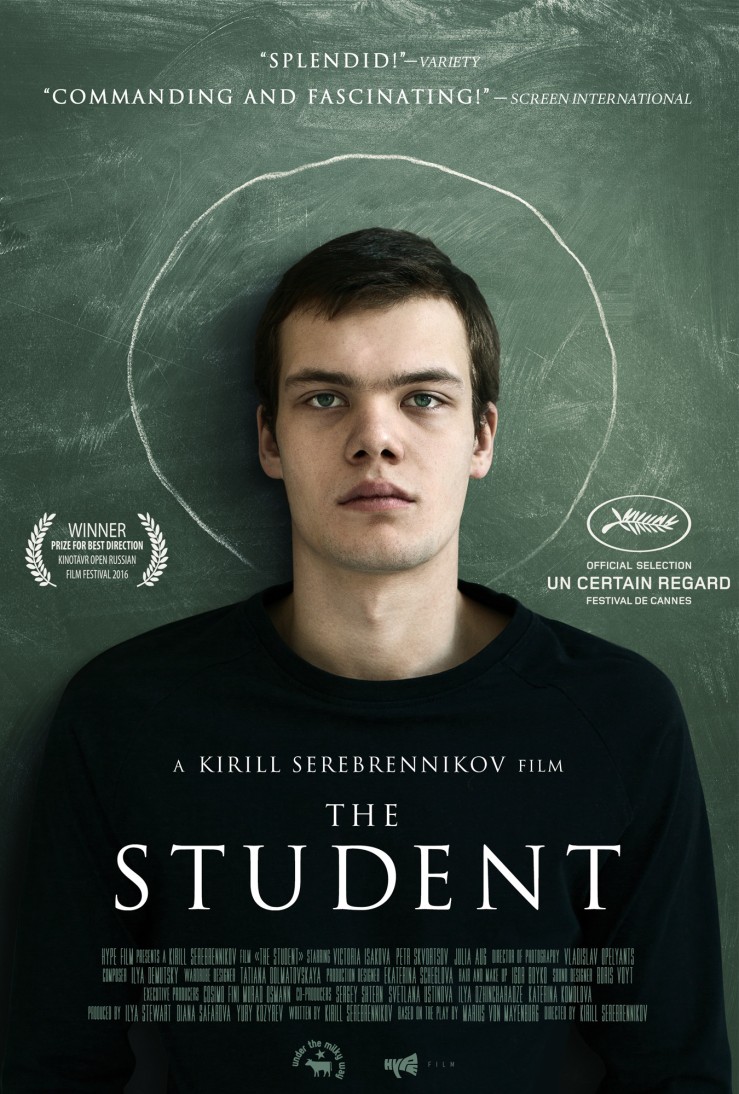 Adapted from German play Martyr, The Student has makings of controversy. Serebrennikov directed the play on stage with much of the same cast before making the film, but sought independent financing; state financiers found themselves concerned with religious themes. Russia’s relationship with religion remains complicated. Under communism, Marx decried religion as the “opium of the people”, following state decried atheism that rejected the long-held power of the Russian Orthodox Church. USSR film followed equal principles: Kino Eye (1924) represents faith through a madman in a sanatorium, decrying himself Christ and bread as his God; One-Sixth of the World (1928) depicts Russia’s religious diversity whilst simultaneously dismissing it; Enthusiasm (1931) opens with collapsing church steeples amid deafening sound. Directing Solaris (1972), Andrei Tarkovsky struggled between his own spiritual convictions and Soviet censors.

Placed in the concrete port city of Kaliningrad, The Student is set against a post-Soviet Russia in a city that was a Prussian and German territory before the end of WWII. Kaliningrad has no linear identity, forced to unlearn its Soviet ways of being. The Student not only follows Venya’s emerging orthodox religious faith, but questions its role within institutions. Putin’s face, in front of the Russian flag, watches over the teacher’s conference. On the bus to one of mother Inga’s three jobs, icons of Mary form a shrine. Cinematographer Vladislav Opelyants injects the frame with a constant church-like presence through the shadows of the long, overbearing windows of the pool and school.

Venya’s school grants unofficial power to Father Vsevolod, teaching classes on Orthodox culture. Vsevolod might only go in odd days, spending most time in church, but assembles children in the gymnasium to bless with water and carry Jesus’ icon; Vsevolod attends teacher meetings on Venya’s odd behaviour, reading liturgical passages. Venya’s hard-line orthodoxy rejects Vsevolod, though he should be a source of religious community, arguing the Bible rejects organised religion, monuments and the act of forgiveness, instead favouring private connection to God.

Venya quotes the Bible selectively to find rebukes to almost anything, carrying his Bible constantly. Liberal Biology teacher Elena tries to best him, enraptured reading scripture online to boyfriend and fellow teacher Oleg’s frustration, not even breaking for birthday cake, covering a wall with alternative interpretations on post-it notes. She is never wrong: the phrasing between Venya’s print Bible and her online Bible, and perspectives and worldviews, differ. Serebrennikov questions how we approach the Bible today, and whether we should still accept its teachings.

Venya fights against modernity and industrialisation, sitting poolside full clothed, Bible by his side, refusing to go in because of girls’ immodesty, juxtaposed against Venya’s dramatic narration of 2000-year old words of battle and conflict. But the school allows Venya power. The school principal questions whether girls unwittingly sexualise themselves towards the ogling gaze of Oleg, seeking answers between the lines of policy as vague as the Bible itself. Elena counters that, maybe, men should wear swimsuits too. At the beach, Oleg and Elena submit themselves to sheer sexuality, almost masturbating each other, as teenagers accept the elements, entering waters naked, an easy answer. Venya becomes a carpenter, building a cross out of loose wood outside his family apartment, carried as a weight upon his back through streets, ducking an underpass, set to the edgy industrial metal of Laibach’s God is God. Erecting the cross in school as though it were a chapel, Venya isn’t reprimanded: the police and principal bless the cross themselves.

Venya’s faith acts as rebellion and escape against the agnosticism and maternal relationship he grew up within. In the opening, Inga laughs off his convictions, telling him he has no religion, but what does she know? Venya’s beliefs allow licence to act like a dick, informing her she shall spend all eternity in Hell unless she finds her faith again, decrying her adultery, divorce and unclean bed as he strips the room of wallpaper, leaving only a mattress. Venya illuminates his innocence, speaking words without knowing how the world works. As Venya tells her he will meet his Father again soon, the film plays verbal double entendre: Inga pushes against it, without realising he actually means God. Inga meets with Vsevolod, hoping to find solution to his behavioural difficulties; frustrated by his insistence “God works in mysterious ways”.

Venya, thinking himself a disciple, manipulates power dynamics. Teachers accept him as a teenager, not a threat, allowing sympathy; the psychologist doesn’t want to tread too hard; other kids revel in the anarchy. During a sex ed lesson, Venya strips naked, showing how it’s really done. During a lesson on evolution, he runs around in an implausibly acquired monkey costume, throwing plastic bones about, as though 2001: A Space Odyssey (1968) lost its matte paintings and nature photography. Venya accepts extremes, decrying in his teenage isolation implicit support for Chechnya and Afghanistan, seeing dying for God as a suicide bomber as noble.

Although The Student never gives answers, it depicts religious visions. In the living room, a wooden cross appears to Venya, seemingly giving him answers. The static of the TV remains on, relaying signals from the beginning of the (non-Biblical) universe. For each verse Venya quotes, the film footnotes its source.

Though Venya is the focal protagonist, he never elicits sympathy; Elena’s liberal perspective encourages support. Elena fights against the syllabus, giving lessons on sexual orientation, protection and evolution, constantly seeking compromise. Though Venya’s outbreak is extreme, it raises a good point: demonstrating how to put condoms on might be a good idea to reduce pregnancy, but a carrot is still a pretty poor substitute for a dick. She stands at risk of promoting gay propaganda, what the principal considers a “lifestyle choice”. Her teaching on Darwinian evolution is met by the suggestion she teach creationism to let the children decide. Elena, in both the certainty and uncertainty of science, fights against a brick wall, through the same logical fallacies that plagued me as a kid. Who created the Big Bang? Who created God?

Elena is cast aside as victim. Venya’s anti-Semitism is dismissed as nothing to take offense at; Vsevolod reads aloud anti-Semitic verse in Venya’s favour, as the principal keeps on laughing. Venya fabricates an incident of sexual abuse, expelling her from her position and dragged out by security, as she forces herself to stay, nailed besides the cross: just as much a victim as Jesus was.

The Student’s most intriguing aspect might be in how it handles sexuality. Inga’s worries about her son are as much a fear against bullying as fears against queerness, from body image to worrying about spontaneous erections in the changing rooms. Venya rejects sexuality, waiting until marriage, not even allowing himself to jerk off. Lidia coerces him to making out, taking her top off and pushing him against the window, but his rejection is clear.

Grigoriy offers an intersection between queerness and faith, but is so underwritten he hardly acts as positive representation. Grigoriy is as gay as Plato is for Jim in Rebel Without a Cause (1955): his attraction is obvious from the first moment we see him, almost falling over Venya as he offers support. Grigoriy is bullied relentlessly, pushed into a bin by classmates. Grigoriy and Venya’s relationship acts as a manifestation of Elena’s reading of the Bible, where Jesus’ disciples were in fact an early gay rights group who all loved each other, becoming a mechanism for the only queer contact he can get, within a culture that rejects any notion of queerness as social outcasts. Grigoriy becomes the boyfriend he brings home unexpectedly: in a dinner scene, framed as a tableau akin to the Last Supper, Inga struggles to split food, as Venya insists the fish can feed the 5000. Grigoriy’s ambivalent faith struggles to balance spirituality and the physical world: as Venya insists they say grace, inviting Grigoriy to speak, he doesn’t know what to say, simultaneously thanking God and thanking Elena for her hard work.

Grigoriy pushes physical contact between himself and Venya, pulling arms around him in lovelorn embrace; Grigoriy and Venya pushing each other around in a fight might as well be fucking. Venya offers his hand, as though it were Michelangelo’s The Creation of Adam (1512), never allowing him to blaspheme. Grigoriy insists his limp is genetic, but Venya persuades him he can be cured of the sins of the father. Grigoriy strips down, removing his pants as he revels in Venya touching his bare leg as healer, supernaturally asking for his leg to grow. Attempting for a second time in class, the pair are caught by Lidia and her mobile, convinced Venya is queer.

In Grigoriy and Venya’s confrontation upon the beach, blessed as disciple, the emptiness of Grigoriy’s character becomes clear. Grigoriy leans in to kiss as Venya firmly rejects him, quoting Leviticus and dismissing him as Judas, breaching sacred trust. Handing him the Bible, Grigoriy becomes yet another queer victim: his skull cracked open, stoned to death, discovered by police as joggers pass by. The film offers no redemption or indictment to Venya: Venya lives, without any chance to mourn for Grigoriy, nor see his loss affect family or classmates. His spirit, dressed in angelic white, appears to Elena, but with little to say. Depicting any queer character in Russian cinema – even an independent one – may have limitations, but Grigoriy acts as a plot function and contrivance.

The Student acts as an intellectual debate, though questions around secularism might work better in its native Russia: the UK has long precedent for separation of church and state and acceptance of a multiplicity of views, although religious traditions still cast a long shadow.