Part nine of The Return delves more deeply into the mystery of Garland Briggs. We’re held waiting: what happens in season 2? The case of blogger William Hastings questioned in handcuffs about the headless, gross corpse of a man in his 40s seems a subtle acknowledgement of the Twin Peaks fandom itself, and its own work online speculating the series’ universe and characters. Hastings has seen into an alternative dimension, hearing the voice of the Major. Viewers might have expected a deeper look into Cooper or Laura Palmer as the focus of this series, but Lynch is throwing things up.

Bobby (Dana Ashbrook) goes home to his mom, as she sits drinking coffee and using her Macbook, but this time in uniform. Briggs’ life becomes cyclical, expecting the presence of Bobby, Hawk (Michael Horse) and Truman (Robert Forster), built upon mystical prophecy: Major Briggs saw his son’s life before he knew it. He too would become a man in uniform, though of a different kind. She detaches a stick from a chair that raises more mysteries than answers. Outside the Sherriff’s Department, Bobby knows what to do, unfolding a piece of paper born out of the stories him and his father told as a kid, predicting what will happen two episodes from now: something about 2:53 in Jack Rabbit’s Palace, amid a drawing of twin peaks. But Briggs’ deciphering also reveals something about Cooper: the doppelgänger (Kyle MacLachlan) walks through the trees, burnt up from Part 8 as he retrieves a bandana from a tree. Briggs’ code tell of two Coopers; the floating head that appeared to Hastings shouted Cooper twice.

Brought into the LA Metropolitan Police Department, the existence of Dougie and his relationship with Janey-E (Naomi Watts) remains just as confounding, changed after a car accident; he lacks any social security, tax records, passport or birth certificate prior to 1997. A ring inscribed to Janey-E was found upon the cadaver. Bushnell (Don Murray) stands over, watching over a western painting. Dougie, in his black suit and his mug of coffee, is becoming more and more like Cooper. Dougie stares at the US flag and a power outlet, as a secretary walks by in red shoes to the tune of patriotic music, as though it’s Diane working at the FBI.

As the sun rises over the Sherriff’s Department, Twin Peaks is cast with an orange glow. We watch the waterfalls of the Great Northern, as Ben (Richard Beymer) admirably refuses to pursue a relationship with secretary Beverly (Ashley Judd). At the Bang Bang Bar, a woman sits scratching herself, as a double act of Hudson Mohawke and Au Revoir Simone perform as the most beautiful thing ever. In Buckhorn, Diane (Laura Dern) continues to be an absolute joy: she complains about the unsightly muted pink waiting room; aghast about not being able to smoke in a morgue, as she drags out a cigarette she shares with Gordon (David Lynch); constantly checking her phone for messages.

Perhaps the most welcome aspect is Lynch’s use of comedy, something he perfected throughout the original series. Cooper’s doppelgänger is handed a pink Alcatel pink flip phone by Hutch (Tim Roth) that must immediately be destroyed; he stands there eating a packet of Lays. Laughter pierces out at us, the most unreal laugh ever heard. Lucy (Kimmy Robertson) and Andy (Harry Goaz) fall into domestic arguments as the height of workplace procrastination, debating whether to purchase a $179 fabric chair for their living room in beige or red; she chooses red to please Andy, foreshadowing the reveal of Briggs’ chair in the following scene. Chad (John Pirruccello) is forced out of the conference room as he sits eating a ready meal on his lunch break, awkwardly shuffling out as he struggles to even open the door. Jerry (David Patrick Kelly) remains in the woods, high out of his mind, freaking out at his anthropomorphised talking foot. But Lynch also manages some clever staging: he pans through a living room staircase to the sound of shouting, before revealing the bloodied body of Johnny Horne (Eric Rondell), a framed picture of the waterfall overlooking the Great Northern behind him. 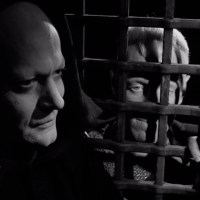