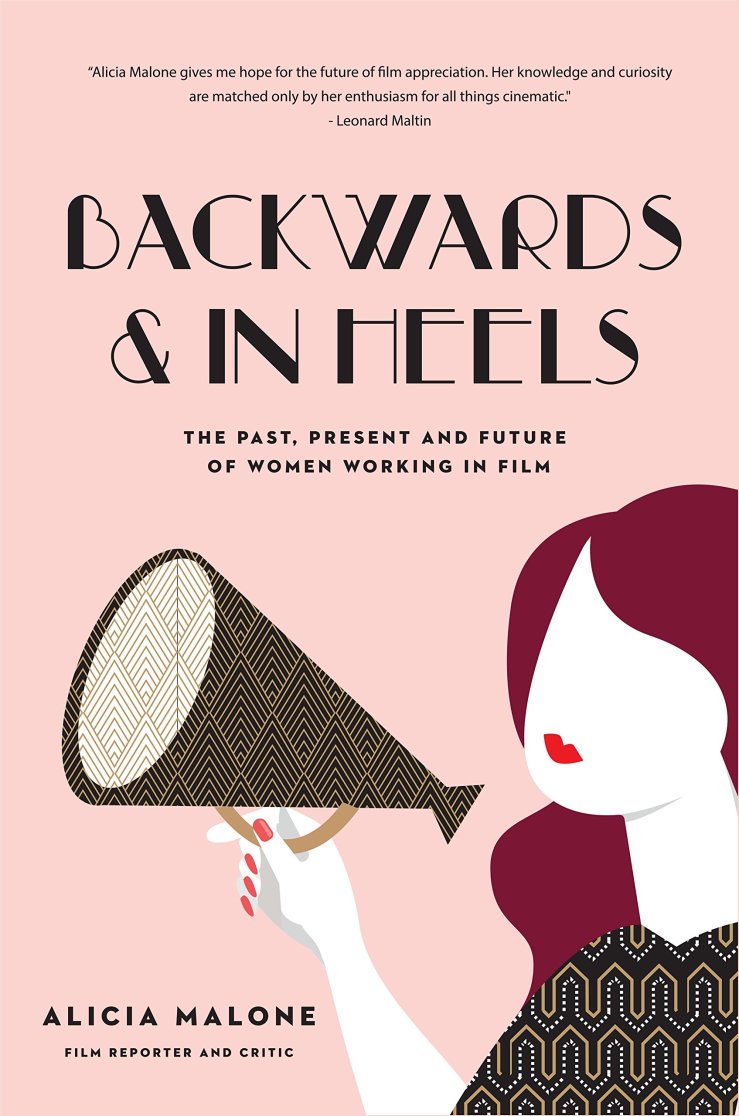 Alicia Malone has been one of my favourite film people since I was first introduced to her in an interview with her on Criterion Now. Malone’s passion for cinema easily comes across in her role as an interviewer, the segments she hosts for TCM, FilmStruck, and the videos she posts to her YouTube channel. The strength of Malone’s segments is her joy, contextual knowledge and her ability to use the stories of personal lives and production that entices the viewer to watch more great films more deeply.

The book’s title comes from a 1988 keynote by Texas Governor Ann Richards that Malone uses as her epigraph, and is perhaps revealing to the plight of women both in the film industry, politics, and every other area of life:

Ginger Rogers did everything that Fred Astaire did. She just did it backwards and in high heels.

Backwards & in Heels has many familiar stories within it, profiling early female filmmakers such as Alice Guy-Blanché and Lois Weber, silent stars like Mary Pickford,  the stars of screwball comedies and ‘women’s pictures’, like Katharine Hepburn and Bette Davis, mythologised sex symbols such as Marilyn Monroe, New Hollywood icons like Jane Fonda, through to the present day with figures still working with Meryl Streep and Octavia Spencer, and more recent directors such as Ava DuVernay. Although far from comprehensive, without an interest in women within the global film industry (although some international talent is mentioned in passing), Malone provides a strong series of empowering biographies (some a couple of pages, some closer to ten) written in an accessible way that encourages the reader to both read and watch more.

Many of the stories Malone tells are less familiar, remembering actresses and directors that might be less acknowledged, like with Hedy Lamarr, Mae West, Dorothy Dandridge or Ida Lupino. We learn of women who achieved far more for humanity and the world at large – and more intelligent – than we ever give credit for. Many of these stories have an element of tragedy: the marginalisation of actors of colour Hattie MacDaniel and Anna May Wong, even in the face of critical acclaim and major directors; the erasure of Rita Hayworth’s ethnic identity; the difficulty of Tangerine actress Mya Taylor to find positive trans roles, instead limited to prostitutes. There’s stories of women who lack agency or control, or were manipulated by men, or failed to get the due credit to support their careers. Hearing about Carrie Fisher and Debbie Reynolds after their passing still makes me so emotional. Malone hits her stride when she approaches the current era of filmmaking, addressing not only directors and actors but activists, producers, screenwriters, editors, cinematographers and so on, interviewing people like Rachel Morrison and Nicole Perlman that might be overlooked because of male directors overshadowing their contributions, but should instead be remembered for shaping the films as they are.

Although Malone doesn’t address narrative content so much, we need to consider how representation functions. Representation isn’t just made from depicting strong and empowered women on screen outside of sexist and misogynistic tropes, images and stereotypes, but in shifting the culture and placing women within creative positions to have an impact on how these stories are told.

With the most recent edition, Malone ties in the events of late 2017 and 2018, tackling the events following Jodi Kantor and Megan Twohey’s The New York Times investigation into Harvey Weinstein and what this means for the film industry as a whole. As Malone concludes, “the only consistency [in Hollywood] is the struggle for women against discrimination, bias, sexual harassment, damaging stereotypes, and constant objectification”, with sexual assault “woven into the very fabric of the industry almost since the beginning.”

It’s a reminder that we need to support the work of female creatives (with films such as The Lure, Desert Hearts and Smithereens joining the largely male dominated Criterion Collection and FilmStruck), but also support journals like Another Gaze and cléo and the wide array of female critics out there – not only the historical voices of Pauline Kael or those still going (Molly Haskell, Amy Taubin) but modern voices today that include Malone, Angelica Jade Bastién, Kat Ellinger, Lindsay Ellis, Sophie Monks Kaufman, Violet Lucca, Kim Morgan, Imogen Sara Smith and so many others.